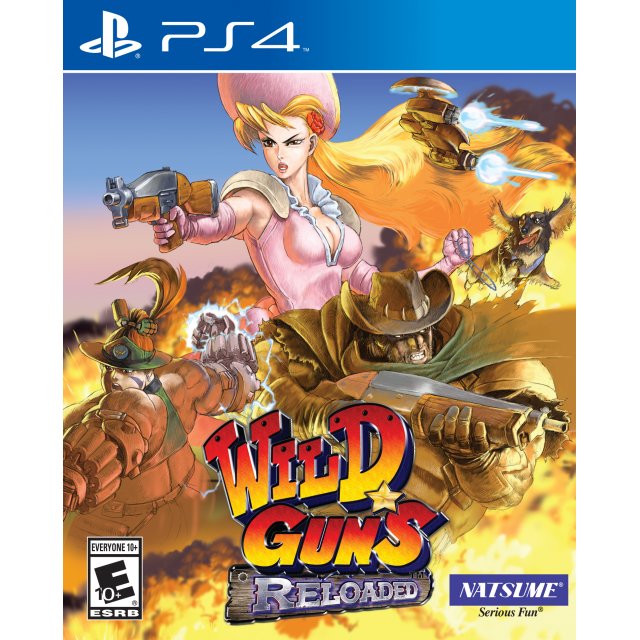 Natsume
Rated
By Our Customers
Compatible with PlayStation 4™ (PS4™)

Works on all systems sold worldwide, a correct regional account may be required for online features.
24h In stock, usually ships within 24hrs.
US$26.99
Natsume
Rated By Our Customers
Compatible With PlayStation 4™ (PS4™)
Version

Works on all systems sold worldwide, a correct regional account may be required for online features.
24h In stock, usually ships within 24hrs
Price
US$26.99
Play-Asia.com Return & Refund Policy
Click on a thumbnail to see more pictures for Wild Guns: Reloaded

An exclusive release for the Super Nintendo, Wild Guns was one of those titles that took an existing formula and polished it to brilliant levels. Inspired from arcade side-scrolling arena shooters like Cabal, Natusme's console release had it all; Wild Guns was a Co-op Western Steampunk gallery shooter with slick controls, amazing aesthetic, and a rewarding challenge.

Players control their character through arena style stages where movement is only limited to left and right; vertical movement comes from agile jumps - absolutely essential when dodging an onslaught of enemy fire. There's a cursor onscreen which acts as a targeting reticle, and this can be controlled to shoot down foes or even lasso them for a moment's breather. It's interesting to point out that Wild Guns probably had the most destructible environment in any SNES game, and behind the bottles and neon signs, there are a wealth of secrets to find. At the end of each stage, players will encounter massive bosses for a great twitch based finale of frantic shooting, rolling, and leaping.

As a re-release, changes include new stages with their own bosses, a wider variety of weapons, online rankings, and the addition of 4 players single-screen gameplay. And just to be thorough, Natsume has thrown in 2 new characters, a daschund who controls an attack drone, and a really buff baby-faced woman who could actually just be a really buff baby ;)

To see that after 22 years, and completely out of the blue, having this cult title receive a revival in Wild Guns: Reloaded is a wonderful thing for gamers. In the landscape of overly cinematic unfulfilling handholding quasi-narrative driven fetch quests that seem to be popular at the moment, it's games like this that remind us of what games use to be: pure fun!

If you are familiar with Wild Guns: Reloaded, why not let others know?