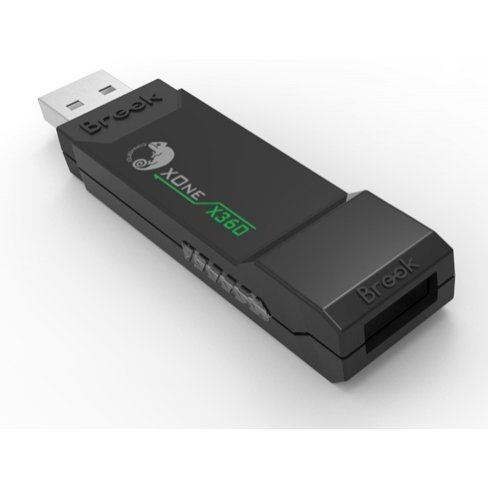 Collections
Brook
Rated
By Our Customers
Compatible with Xbox One™ (XONE™)
Get informed when this item is in stock by using our Personal Agent from the right.

Button Configuration
The Brook Xbox 360 to Xbox One Controller Adapter automatically recognizes Xbox 360 gamepads and racing wheels and auto-configures their buttons for use with the Xbox One as shown on the map. No toggling is required.

Note:
*Each Brook Controller Adapter can handle only one Xbox 360 or Xbox One game controller at a time.
*For use with a PC running on Windows 7 please install the original Xbox One driver from Microsoft. Older operating systems are not supported.

Tales from the Borderlands: A Telltale Game Series
US$ 29.99

If you are familiar with Xbox 360 to Xbox One Converter (Black), why not let others know?

[This review is based on another version of this product]
ghostlyavenger (47) on 29, Aug. 2019 06:39 (HKT)
great adapter
works as intended, if you update the firmware it also works with the xbox one controller for both switch and ps4. Nice to have options.
Ps. If you are using XBO or wiiu pro controller on the ps4 the shortcuts for share are minus+L and for touch minus+R.
[This review is based on another version of this product]
linandrew881 (1) on 27, Aug. 2019 01:29 (HKT)
Works great on both Switch and PS4!
I bought this because I love the Switch Pro Controller and really wanted to use it on the PS4 as the Dualshock doesn't feel comfortable for me after awhile. Instructions were all in Japanese but it was all pretty intuitive to sync up. Just press the big red button until it flashes then hold the Sync button on your controller and you're good to go!

I was also able to successfully connect a Dualshock controller to the Switch. There's a few things to know to get it to work, but once you change the settings it works flawlessly. First to sync the controller to the converter you need to hold the Share and PS buttons together, the lightpad should flash and then sync after awhile. Next I found you have to change under System Settings > Controllers and Sensors > Pro Controller Wired Communications and turn that option on. Then the Switch should be able to find it when you go to "Change grip/order."
[This review is based on another version of this product]
krizald13 (2) on 06, Jun. 2019 01:13 (HKT)
bueno
se puede jugar con los controles del ps4 y xbox one, el elite se necesita un cable, de hay en mas no trae mucho lag en ambos mandos
[This review is based on another version of this product]
ghostlyavenger (47) on 28, May. 2019 03:39 (HKT)
Still Great
I've got another one. (that good) something I forgot to mention on my past review is that the unit is usb powered, and most tvs have usb ports now a days so its pretty convenient. Great for self purchase or gift as well
[This review is based on another version of this product]
ghostlyavenger (47) on 29, Mar. 2019 11:05 (HKT)
great gadget
Amazed that its smaller than expected, also has a neat feature that it changes automatically if a new signal is on. Making it ideal for consoles.
Specially useful if you have plenty of consoles and not many inputs on the TV or monitor.
1 »