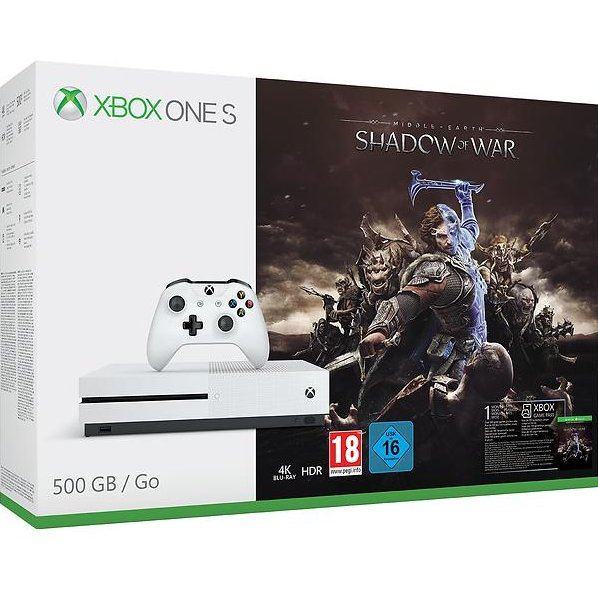 sold Out of print / Out of stock.
Manufacturer
Microsoft
Version


Click on a thumbnail to see more pictures for Xbox One S 500GB Middle-Earth: Shadow of War

Xbox One S 500GB Middle-Earth: Shadow of War features an Xbox wireless controller, a full-game download11 of Middle-earth™: Shadow of War™, four Legendary Champions from different tribes for your army and the Epic Sword of Dominion.

Xbox One S features 4K Ultra HD Blu-ray™, 4K video streaming6, High Dynamic Range2 and premium audio. Immerse yourself in the epic scale of Middle-earth as you forge a new ring and siege epic fortresses to face Sauron and his Nazgul. Experience how the award-winning Nemesis System creates unique personal stories with every enemy and follower, and go behind enemy lines using strategy, cunning or brute force to conquer Sauron's forces and turn them against him. Get instant access to over 100 great games with 1 month of Xbox Game Pass8 included. With the biggest blockbuster titles, over 100 console exclusives, and three generations of games3, there’s never been a better time to game with Xbox One.

No reviews for Xbox One S 500GB Middle-Earth: Shadow of War yet.