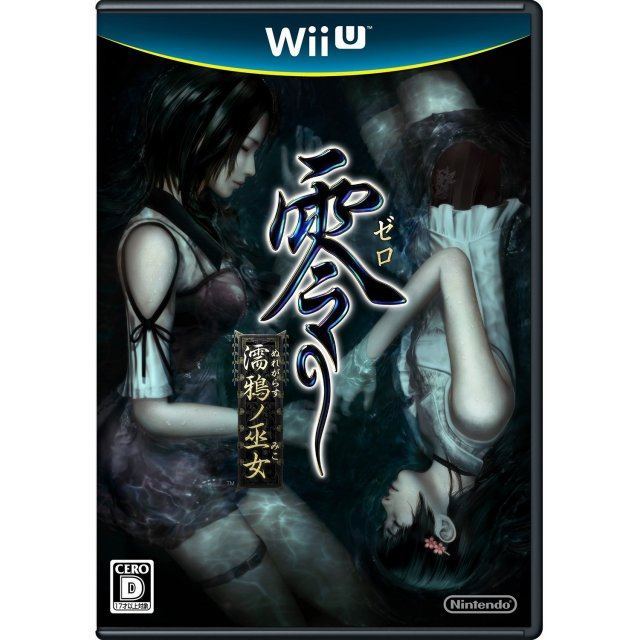 Nintendo
Rated
By Our Customers
Compatible with Wii U™ (Wii U™)
For JPN/Asian systems only.

Earn 138 Coins for the Loyalty Program (beta-test)!
Trustpilot
Trustpilot
Click on a thumbnail to see more pictures for Zero: Nuregarasu no Miko

Following traditional Japanese horror tropesZero: Nuregarasu no Mikois set in a large environment against the backdrop of a cursed lakeside manor in the mountains, where themes of water and hydrophobia will play a large role in constructing the atmosphere and storyline.

The Wii U GamePad is definitely being used in some cool new ways andZero: Nuregarasu no Mikowon't be left in the dust.The GamePad will be a part of the core game mechanics andmimic the trademark Camera Obscura, allowing players to see things that might remain unseen by the naked eye.

If you are familiar with Zero: Nuregarasu no Miko, why not let others know?

shadowstar123 (249) on 09, Nov. 2015 03:43 (HKT)
Much better than The Grudge for Wii!
The Grudge for Wii would have been good if the controls weren't so bad. So, I tried this game out and it played very well. The horror factor is pretty good, but doesn't overdo it or try to overdo it. The idea behind using the gamepad as the camera was probably one of the more clever ideas for the Wii U. As far as the characters go, it seems pretty easy to get connected with them, if you understand Japanese. The scenery, overall environment and gameplay is what makes a good horror game. Shooting zombies is not a horror game, that would fall under FPS. Your only defense in this game is your camera. You have to outsmart the ghosts, not shoot them, at least not with any real weapons other than your camera. If you want to get this game, it is available for US Nintendo Wii U, however, it is download only and edited for US players. This game is physical and is completely unedited meaning that by Japanese viewing under CERO D, it is uncut as the game director intended it to be played. The US version is rated M, but realistically, it would be a rated T or CERO C game as it has been modified.
picco.cuile (10) on 08, Feb. 2015 01:31 (HKT)
Really fun gameplay
I would say if the language is not a problem for you, then go get this game. you won't be regret at all as long as you like horror story and merge yourself into the gameplay.
parkignolo (1) on 22, Dec. 2014 23:40 (HKT)
is the best Wii U game
a perfect title for Wii u gamepad for who loves horror and spiritual world and who loves the entire saga of fatal frame!i suffer a'lot cause it would not arrive in Pal regions...i hope in a freeloader for the Wii U!
Hayato01 (503) on 14, Nov. 2014 10:32 (HKT)
Must have
very creepy and fun. The graphics are stunning, and the game makes use of the gamepad very good.
Chiaki Nanami (7) on 12, Nov. 2014 01:00 (HKT)
No title
This game is amazing!!! The graphics are stunning and I enjoyed playing! I fell in love with the characters and their stories, and I'm extremely happy I purchased this game! This is another great entry in the Fatal Frame series!!!
1 »